Please note that two sessions will be given at different dates listed below.

Two live sessions are over. Please scroll down to view the video lectures.

Microorganisms are found in almost every conceivable niche of the Earth from hydrothermal vents in the deep ocean basins to the cold subglacial lakes of ice sheets. As such, microorganisms have played an important role in transforming Earth systems (e.g., accelerating mineral weathering), global climate change, and mediating different biogeochemical cycles over most of Earth’s 4 billion history. In-situ microbial-rock interactions are dynamic and occur at both temporal and spatial scales that prove difficult to investigate at resolutions needed to fully understand them, thus necessitating the need for the development of noninvasive tools/sensors to interrogate these processes. Interestingly, these microbial-rock interactions modulate changes in physical properties in the rocks, generating measurable geophysical signatures that can be recorded with conventional geophysical sensors (e.g., seismic, magnetics, electromagnetics). The recognition of these microbial-catalyzed changes in geophysical signatures resulted in the development of biogeophysics: the study of the physical changes in earth materials catalyzed by microorganisms. In this presentation, I will provide examples of how geophysical tools are used to sense subsurface microbial activity, from cell growth and biofilm formation to biomineralization and biogeochemical cycling of metals to the monitoring of bioremediation and their use for investigating oilfield microbial processes and the search for life on other planets. Challenges and limitations also will be highlighted, and potential for future advancements in the field will be discussed. 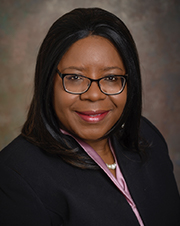 Her research uses geophysical methodologies to investigate geologic processes spanning the near to deep subsurface and from the micron to lithospheric scale. She is internationally recognized for her pioneering and interdisciplinary work on biogeophysics which has won numerous best paper awards at international conferences. Her biogeophysics research focuses on investigating the interaction between microorganisms and subsurface geologic media and the application of this knowledge to bioremediation optimization, oil exploration, and as a proxy for biogeochemical processes. Her tectonophysics studies have included integrated geophysical imaging of lithospheric and upper mantle structures to understand the geodynamic processes of continental rift initiation and how preexisting Precambrian structures modulate strain localization leading to faulting and generation of earthquakes. Atekwana has conducted international field-based research in several countries including Botswana, Cameroon, Egypt, Malawi, Tanzania, Turkey, Uganda, and Zambia with her students.

Atekwana has been the lead principal investigator of many research projects funded by federal agencies and private companies. She has received several awards including the 2019 Association for Women Geoscientists Outstanding Educator and the 2016 Society of Exploration Geophysicists Outstanding Educator award. She was inducted an Honorary Member of Phi Beta Delta, the Honor Society for International Scholars, and International Golden Key Honor Society. She has been convener of several workshops and special sessions and an invited speaker at international conferences and research institutions.

Atekwana is passionate about her students and early-career faculty and is a mentor for women and minorities in the sciences. She has been advisor of more than 40 graduate students and postdoctoral fellows.