Seismic technology in northern European waters and the prevalence of multiples

Please note that two sessions will be given at different dates listed below.

Two live sessions are completed. Please scroll down to watch the videos from the recordings below. SEG members, view the course for free!

Good ideas tend to stand the test of time. True for several technologies that are called new or revolutionary. Just take a minute and think about blended sources becoming almost standard in seismic surveys within the past five years, invented in the 1980s for seismic exploration purposes, and based on Colin Cherry’s "cocktail party problem" from 1953. We often recycle, reinvent, and renew ideas. Quite often with long periods between the initial idea and its large-scale adoption. On average, the oil and gas industry has taken about 20 years in this process. Why? Is it because we do not follow through? Too much success with our current best practices? I doubt it. Sometimes it is because of practical limitations, sometimes we do not understand the full potential of a given idea. Often, it is because we are too conservative as an industry and risk-averse. This is an industry more comfortable with incremental improvements than radical change. Taking higher risks is associated with an increased possibility of higher rewards and that of worse failures. Seismic technology is expensive by nature, the cost of a new survey is measured in tens of millions of dollars, the time that it takes from survey design to an imaged volume is measured in years, the risk of not getting a usable answer or of getting a worse answer than what is expected with current technology is always there. Thus, the cost and time of trying something different are key factors in this risk-averse behavior. Maybe a reasonable strategy when exploring in a recently discovered, newly prolific basin. However, once a prolific basin becomes mature, failure increases if new risks are not taken. Such is the case for exploration in Northern European waters where all the existing infrastructure will soon become a liability if not enough, financially sustainable discoveries are made.

The oil and gas history in Northern European waters starts in the 1960s and claims its prolific place on the energy world map in the mid-1970s, right after the Yom Kippur War, which caused the Arab States Embargo, leading to a shortage of hydrocarbons. The impact on global supplies led to a considerable surge in prices that in turn, allowed the development of both the Forties and Ekofisk fields, discovered between 1969 and 1970 in the UK and Norwegian sectors, respectively, to become commercially viable. Since then and following a long list of discoveries accompanied by advances in offshore geophysical data acquisition, processing, and reservoir monitoring, this area has reached its current state of near-full maturity. The creaming curve has turned almost flat. Exploration continues, wells are drilled, but economic discoveries and their associated sizes keep declining. Thus, the spare capacity of the existing infrastructure starts to increase. Also, nearby frontier areas have not been fully explored and their geological complexity remains remarkably challenging. These facts are likely the reason why we have seen here an acceleration in the development and large-scale utilization of technology in the past decade. Examples include the embracing of broadband processing technology in combination with a deeper-towed single sensor and multi-sensor streamers, wide-towed and blended sources, exploration with OBN at previously unseen scales, etc. This is all great, but with all the historical and modern data, are we finding what we are looking for? The answer is: Not at the scale we need. Have we reached a limit? Can we do more? Definitely.

The recently acquired OBN and MAZ exploration surveys have delivered their first regional images and target-specific reprocessing has just started. Hybrid and new higher-resolution survey designs are in the process of being tested. Their scope is multi-purpose: not only for hydrocarbon exploration, but for very shallow imaging for mineral exploration, shallow hazards identification, and placement of equipment for renewable energy. Furthermore, high-end model building such as ultra-long offset FWI and imaging is being applied to further push the boundaries and extract as much information as possible. There are plenty of remaining challenges that can be addressed with technology. One of them is the long-standing problem with multiples, both free-surface and interbed. We have seen several generations and advances in free-surface multiple technologies, but the focus on interbeds is less advanced, even though the theory has been recognized since the 1990s. Shortcuts in preprocessing are not compensated for in imaging. It is, unfortunately, still common to hear of a failed well that was drilled as an effect of a multiple not been removed or well-identified in processing. Production-asset members are often asking for help in identifying and removing subtle interbed multiples that adversely affect their inversions and well-planning decisions. This becomes more critical with the more mature assets where the production level has started to decay. The time has come to not only deploy the most sophisticated survey designs but to turn every stone in the processing sequence and to work in more integrated teams (across geo-disciplines) to solve the most relevant problems. 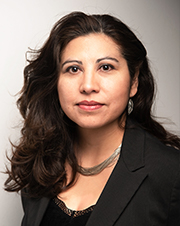 Adriana Citlali Ramírez is a Mexican citizen who has a PhD in physics from the University of Houston’s Mission-Oriented Seismic Research Program. During her graduate studies, Adriana did internships with Shell, Statoil (now Equinor), ConocoPhillips, and BP. After graduation, she worked in R&D at WesternGeco in the United States, and later at PGS in the UK. In 2012, Adriana joined Equinor’s Research and Technology Exploration unit in Norway, where she led the R&D work related to broadband technology. She later moved to Geophysical Operations and focused on survey design and new technological developments. During her last years at Equinor, she worked as a geophysics specialist in the Chief Geophysicist’s Team in Exploration. In August 2019, Adriana joined TGS in the position of Chief Geophysicist. She has an advisory role for the discipline of geophysics where she focuses on strategy, business, and technology with emphasis on Europe and Russia.

Adriana has authored four patents and more than 50 technical publications. She is a member of the EAGE Research Committee, SEG Research Committee, SEG Women’s Network Committee, and Founding Chair of the SEG Europe Regional Advisory Committee. From May 2018 to December 2019, she served on the Board of Directors of SEAM (SEG Advanced Modeling Corporation) –she is now the vice-chair of the Board and chair-elect for 2021. In early 2020, she was awarded the first-ever Monterrey Institute of Technology (Tecnológico de Monterrey) EXATEC Career Award and was chosen as the SEG Honorary Lecturer for Europe in 2021.